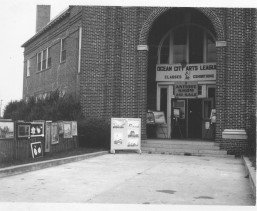 The Art League of Ocean City (ALOC), originally the Ocean City Art League, was founded in 1963 by a small group of local artists. During the summer of 1964, the ALOC was granted use of the current City Hall Building at 3rd & Baltimore Avenue for its headquarters. The first exhibit was held in the 2nd floor ballroom.

They held their first outdoor show on the porch of Beach Plaza, Phillips-by-the-Sea but were shut down because merchants complained that they had no license. The show was then moved to the Wharf Restaurant at Montego Bay. In 1974-75, the ALOC used a Boise Cascade building between 49th and 50th Streets (now the Ocean Pines Beach Club) for its headquarters and where they also hosted Art Expos 1, 2 and 3. During 1976-78, they moved to the old Mt. Vernon Hotel (later Kate Bunting’s Seafood Restaurant) on Talbot Street. Then in 1978-84, classes and workshops were held in rooms above the Talbot Street Café owned by board member Billy Fetterolf, which was also the location for the first Starving Artist Supper.

In 1980, the ALOC held its first Annual Art Exhibit with prizes in the church hall of St. Paul’s by the Sea on 3rd Street. In 1983, the ALOC was the recipient of $5000 from the 2nd annual Bartender’s Ball and part of the money was used to establish the Simpson Memorial Scholarship fund in honor of the late Kenny Simpson, a local artist. 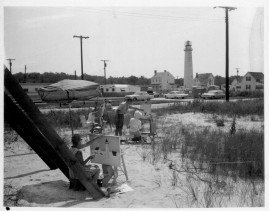 The ALOC became incorporated with early bylaws adopted on 2/27/76. Their goal was to be part of the Maryland Arts Council. The desire for a permanent home to exhibit art and conduct classes led the group to begin raising funds. The group approached the City about renovating an abandoned building on 94th Street. The building had formerly been a pool house and had been vacant for approximately eight years. In 1984 board member Alfred Harrison was instrumental in obtaining approval from the Town of Ocean City for a permanent conditional use for the Art League to make the building its home. A building fund committee was formed to raise money for the renovations and many volunteers helped by donating their time and equipment as well. Kim Fisher was President of the League when the group obtained its nonprofit status. Mr. Harrison led the renovation efforts. A once condemned building was turned into an attractive space for displaying artwork. 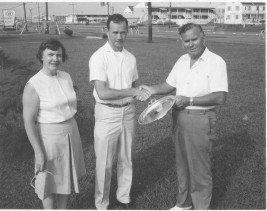 In October 1985, after almost a year of work, the building opened with an exhibit of 44 paintings and a gala reception. At that time, membership was estimated at 100 people and dues were $10. Board officers were: Jody Veader, President; Betsy Hall-Harrison, Vice President; Shirley Hall, Secretary; and Anita Bunting, Treasurer. 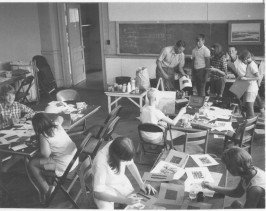 In 1987 board member Anita Bunting organized a concert to raise money for the Art League to sponsor a scholarship fund. This scholarship money is still awarded annually to a local Stephen Decatur graduate wishing to pursue a career in the arts. After her death, the scholarship was renamed in her honor. 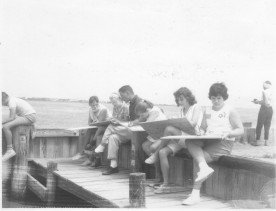 Long time Board member Shirley Hall along with the Ocean City Woman’s Club helped coordinate an annual youth exhibit. When she died this exhibit was renamed in her memory. The Shirley Hall Memorial Youth Art Exhibit is still held yearly and features artwork by local middle and high school students.

In 1990, the organization’s official name was changed to the Art League of Ocean City. By 1995, the Art League was outgrowing the 1200 square foot building and began making plans for an expansion. The group was unable to apply for grant funding as there was no written lease for the building. A “raise the roof” fund was established and once again the group, led by League President, Inga Tuvesson, appealed to City Hall asking for support for expansion. No action came from this effort though the seeds for growth were planted.

In 2005, the Sand Castle Home tour was established to raise funds for a larger space. By that time the city had determined that the old structure would not withstand expansion and a new building would have to be built. The Board members felt that if they were able to go to the City with the financial support 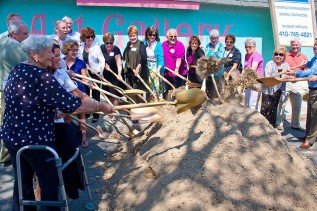 for obtaining fixtures for the building, perhaps the Council would help with the construction costs. In 2011, after raising $200,000 through the home tours, the Art League, spearheaded by President Rina Thaler, once again approached the City Council. This time they had a plan for the construction of a 7,500 square foot facility to replace the aging pool house building. Recognizing the value that the arts bring to the community the Council approved the request for $600,000 in construction costs and the plans were finalized for a new home for the Arts in Ocean City. 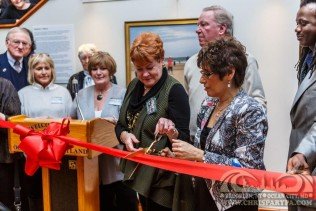 Senator Jim Mathias and Delegate Norm Conway then sponsored bond bills in the State Senate and House. The State of Maryland agreed to contribute $250,000 to the funding for the building. Commissioner Louise Gulyas then encouraged the Worcester County Commissioners to make this a true public/private partnership and they pledged $100,000 over 5 years to the project.

In 2013, the Art League of Ocean City celebrates its 50th Anniversary in its new home the Ocean City Center for the Arts. What once began as a small group of artists has become a vibrant non-profit organization located in a state of the art facility. 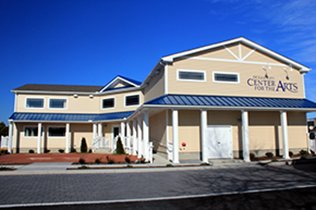