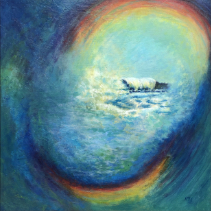 MARIAN BICKERSTAFF, originally from Telford, PA has been painting in oil since the late 70’s starting with a paint set received as a gift. She studied with several painters locally in Southeast PA and at Montgomery County Community College (PA). She received several awards including two blue ribbons from the Perkiomen Valley Art League. In 1990, one of her pieces – “Skippack Barn in Snow II”, was chosen for the cover of the Souderton Independent’s Christmas Insert.

After retiring from a 37-year banking executive career, she and her husband moved to Ocean Pines, MD in 2007 and her retirement goal was to devote more time to her artwork. She immediately joined the Art League of Ocean City and began taking classes and workshops, experimenting with oils, acrylics, collage, mixed media and pastels. Her focus continues to be painting in oil which generally convey a sense of place, light and luminosity and acrylic work in bold color and surface texture, as she continues experimentation with surface treatments and techniques and a thought process of “I wonder what would happen if…“. 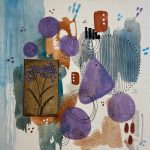 BARBARA BUFORD has been creating art for over 50 years. She is a self-educated mixed media artist that developed her skills by attending art classes in collage, going to numerous art retreats and with lots of experimentation.
In 2007 she created an art program for adults with developmental disabilities called the Creative HeArts. In 2015 she was fortunate to have her art work published in an art book called “Intuitive Painting Workshop” by Alena Hennessy. In 2021 Barbara was awarded the annual SHERO Award from the Ocean City Art League for teaching art to diverse populations. In 2022 Barbara completed Creative Aging training sponsored by the Delaware Division of the Arts. Access Creative Aging Initiative. Barbara believes that art heals and everyone should have the opportunity to create.
Barbara currently teaches art at various venues in Sussex County, DE and in Maryland.

MEGAN BURAK is a contemporary realist artist working mostly in oil. She was born in Pittsburgh, Pennsylvania and moved to the Eastern Shore of Maryland at the age of four. Burak graduated in the fall of 2015 from Salisbury University with a Bachelor of Arts degree and a concentration in two-dimensional art. She has won multiple awards while exhibiting in juried shows and galleries and has shown all around Maryland as well as New York and Washington DC. She was a featured artist in 2019 at the Art League of Ocean City, a featured artist in 2018 at the Rehoboth Art League, a semi-finalist in the Bethesda Painting Awards for 2017, a semi-finalist in the Michaels Art Challenge for 2016, and the recipient of the University Center Art Award from Salisbury University for 2015. Several of her pieces have been purchased by Salisbury University as part of their permanent collection. Her inspiration is drawn from her emotions and the world as she sees it. She currently lives and paints in West Ocean City, Maryland. 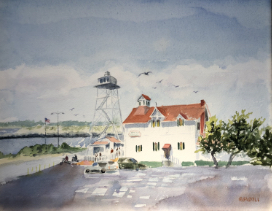 GERILYN GASKILL has a passion for capturing the beauty of the Delaware coastline and Delmarva landscapes in watercolor, oil and acrylics. Her interest in art started in kindergarten and was helped along by her great-grandfather artist August Seiler, who also painted coastal imagery.

Gerilyn was born and raised in Wilmington DE, spending many summers in both Rehoboth and Lewes. With the call of the ocean, Gerilyn now resides closer to the beach in Georgetown.

Gerilyn’s full-time career in nursing took her from her beloved Delaware briefly residing in both Riverside CA and Baltimore MD. She retired in December 2008, quickly moving back to DE and hasn’t looked back since. Art consumes her every waking moment. Gerilyn also volunteers a great deal of her time educating youth in the arts. For several years, she has organized and taught an art camp to local youths at the Millsboro Art League. She is also a regular instructor at the Art League of Ocean City, Rehoboth Art League, and for community group paint nights. 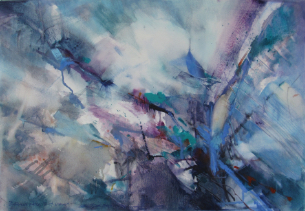 GAIL ZINAR was born and raised in Greenbelt, MD. At age 17, Gail entered the Corcoran School of Art. While studying at the Corcoran, Northern Virginia Community College, and the Department of Agriculture Graduate School, she worked as a cartoonist trainee for a subsidiary of Prentice Hall Publishers, did a two year art internship with the Federal Aviation Administration, and became a senior illustrator with the Defense Communications Agency. She also freelanced. The next ten years were spent creating visual presentations, publications, and display work for the Defense Department. After working thirteen years as an illustrator, Gail resigned in 1978 from the government to pursue her dream of becoming a mother and fine artist. She began illustrating “real life” stories of children and family experiences upon request. This led to the creation of her business, The Artland Express, focusing on stationary, hand-painted prints, and paintings. Gail has taught as an adjunct instructor for the Catonsville Community College and given demos and workshops to colleges, organizations, and clubs. Having lived most of her life in the Baltimore Washington Area, she recently moved to Lewes, DE. Gail lives life through her art. She feels that every expression of life, personality, and spiritual self is portrayed through her use of color, line, shape, and form in every piece she creates. Since 1992, Gail has taken courses in watercolor under the direction of Morris Green, Fritz Briggs, and Joan Bevelaqua. She has combined pen and ink drawings with watercolor washes, and uses various multimedia to accomplish the “unknown aura of life” in her art. Organizations with which Gail has been affiliated are the Woman’s Caucus on the Arts, Columbia Art Alliance, Patuxent Art League, Howard County Art Guild, Maryland Federation of Art, Oella Mill Art Center Gallery, the Laurel Art Guild, the Rehoboth Art League, the Bethany Beach Watercolor Society, the Milton Art League, the Millsboro Art League, and the Mispillion Art League. She is a signature member of the Baltimore Watercolor Society, the Washington Watercolor Association, the Delaware Watercolor Society and the Maryland Pastel Society. She served as Vice President and then President of the Laurel Art Guild, and served as President of the Washington Watercolor Association. Her award-winning paintings have been exhibited in both private and public galleries throughout the Washington-Baltimore metropolitan area, the Eastern Shore, and nationally. In 2009 she received the American Pastel Society Award of Excellence from the Maryland Pastel Society. 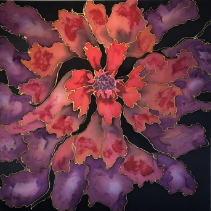 MITZI ASH is a visual artist recognized for her large-scale, organic paintings that suggest the natural world. Using luxurious white silk and color-rich dyes, Mitzi invites us to marvel at the beauty of flowers, leaves, and trees through her use of shape, form, and color, capturing at once their simplicity and complexity. A resident of Ocean Pines, MD, Mitzi is a member of the Worcester County Arts Council, the Art League of Ocean City, the Rehoboth Art League and Silk Painters International. She has been painting on silk since 2001. She was a featured artist at the “Emerging Women” art show in Shepherdstown, West Virginia in 2005. Mitzi received the 2012 VIA (Very Important Artist) Award at the Rehoboth Art League Fine Art Exhibition. In 2013, The Art League of Ocean City judged “Together Again” as Best in Show. In 2015 the Worcester County Arts Council awarded Mitzi 2nd place ribbons for “Tree Rings” and “Blessings,” respectively. Mitzi received 1st place for wearable art from the Rehoboth Art League in 2016. In 2017, Mitzi assembled an international exhibition of silk painting at the Ocean City Center for the Arts. 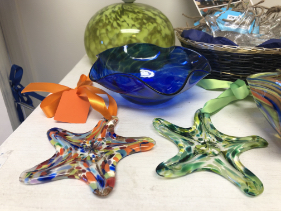 JEFF AUXER: “I believe everyone desires a unique surrounding that speaks to their true self. Functionality manifests itself in the vibrant colors and shapes I am able to create in my studio. My work incorporates Venetian glass techniques and handmade tools resulting in unique, one of a kind works of art that are not only beautiful but also applicable to everyday life.” 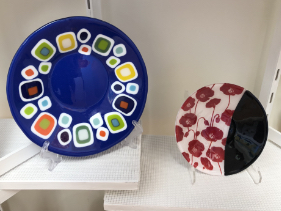 PETER GIBSON grew up in Michigan, and moved with his wife Kathy, to Maryland in 1973 for a job with the National Ocean Service.  That winter, he took an Adult Education Class on Stained Glass.  He was hooked on glass, and began a long period of taking workshops, learning, trying new things, and making projects for family and friends.  In 2008, he retired from the Federal Government, and as a retirement gift to himself, purchased a kiln to start working with fused glass.  Since that time, he has spent as much time as possible with new workshops, learning, trying new things, and making projects.  In 2017, he began teaching Fused Glass classes at the Art League of Ocean City.  He continues to work in both stained glass and fused glass, enjoying every minute. 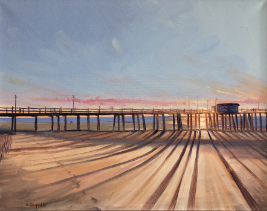 DAVID SIMPSON: Born and raised in Ocean City, David has had a great opportunity to connect to the shore and everything it had to offer. In 1999, he reconnected with the art world at Salisbury University, where he achieved both a philosophy degree and a fine arts degree in painting. The subjects of his oil paintings traditionally are focused on the human figure, landscapes, and seascapes. Most recently, his paintings have focused on the elements of texture, color, and light via seascapes. In the spring of 2012, he graduated with Masters in the Art of Teaching from University of Maryland Eastern Shore. He is showing work locally at community art organizations, winning awards, and teaching. In addition, he recently became a board member for the Worcester County Arts Council and holds the office of Treasurer. As an art instructor, he is happy to contribute professionally to the promising local art community. 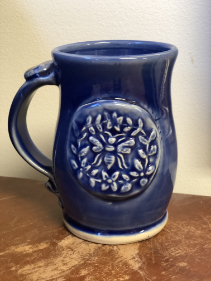 ROBERT JOHNSON and Sarah Halcott created Amused Studios as their home based art studio in 2005. They mainly use clay as their medium and create a colorful eclectic mix of functional and decorative pottery. Robert has focused on throwing classical shapes sometimes altering them and finishing them with a saggar or horsehair firing to create works of art. He particularly enjoys making bottles with tiny tops that take a steady hand and patience to form.  He often adds a layer of mica slip he created which adds a subtle sparkle to the pots.  He chooses which pots to finish with horsehair which leaves black squiggly lines on top of the white clay and golden flecks, or saggar which creates a smokey and mottled red over the sparkle.  He has been inspired by South-Western Native Americans who use a micaceous clay body, all they make glitters with this golden substance. 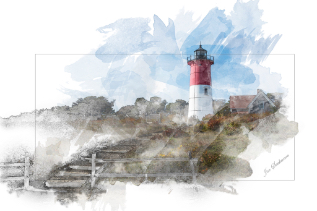 JOSEPH SCUKANEC is a local photographer residing in the town of Snow Hill on Maryland’s Eastern Shore. He developed a passion for photography during his twenty-year career in the US Navy as a way to record and share his experiences, as he traveled throughout the United States and the world. He most enjoys photographing local events, still life, landscape, nature and close-ups. “Whether it is a macro or landscape photograph, or a composite of photo art, I want to lead the viewer beyond the photograph into a visual journey through an artistic impression of my imagination.”