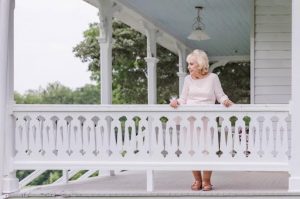 Everyone yearns to feel beloved, but the word takes on an entirely new meaning when used synonymously with one Baltimorean. Leonora “Peachy” DiPietro Dixon, an iconic and longtime waitress, is an all-time favorite in Charm City. For over half a century, she

has met celebrities and politicians galore, making memories to last a lifetime. She has also developed relationships with Baltimore’s finest citizens, serving generations of families. With countless stories to tell, Peachy is a published author, sharing the triumphs and pains of her wild life as well as fictional local mysteries for the people of Baltimore who know her best.

With too many stories to tell (and forget), Peachy decided a decade ago that it was time to start writing. While you may not know it after just one meal with her tableside at Sabatino’s, she is a walking encyclopedia of all things Baltimore and one of the most special citizens in the city. Her books are and will continue to become a record of the last half-century. Her unwavering love for Baltimore, despite its faults, shines through every phrase.

While many doubted her writing talents and refused to publish her work, some of Baltimore’s finest, including media personalities Michael Olesker and Marty Bass, finally recognized her unique and untold stories as local gold.

Her latest book is her first work of fiction but still focuses on her beloved Baltimore. Entitled, “The Baltimore Bookies: A Story of Greed and Misconception,” the action-packed and intense book chronicles the struggles between competing bookies. The book also highlights the perilous impact of drugs in the inner-city. While this is her first shot at fictitious writing, she says her knowledge of the city certainly helped to weave the story together. In fact, she completed much of her writing while on vacation in her absolute favorite destination, Ocean City, Maryland. 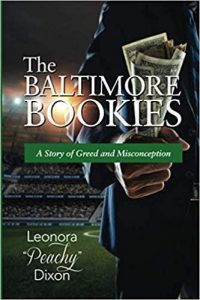 Peachy’s new book, “The Baltimore Bookies,” is available for purchase now. She will host a book signing party at Sabatino’s on Tuesday, September 28th, from 5 to 9 p.m. Copies are also available now at Sabatino’s, the Ocean City Center for the Arts on 94th Str., or by email request to peachydixon1@gmail.com. 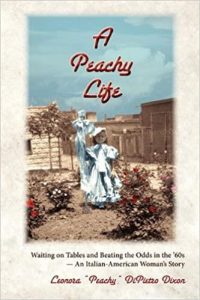 Recognized for her decades-long career at Sabatino’s beginning in the 1970s, Dixon, an Italian herself, is a familiar and steadfast presence in downtown’s Little Italy neighborhood. Her life began in the early 1940s in Highlandtown, a diverse blue-collar neighborhood in East Baltimore. Born to hard-working parents, Peachy’s father worked at Bethlehem Steel, and her mother was a homemaker.

Growing up in a working-class family, the Patterson High School graduate did not have strong aspirations to leave the city, but as we know now, that did not stop her from achieving great success in the hospitality business. Still, her life came with many personal struggles, which she chronicles in her first book published in 2011, “A Peachy Life.”

At the forefront of her challenges was her marriage, in which she endured abuse that was the reality for far too many women in the 1960s. Pregnant at 21, she grew up rapidly and became the strong and independent woman she is today. With a fighting spirit that has weathered heartbreak, cancer, and defeat, she is the true soul of Baltimore.

“For my entire life, I have never lived anywhere but Baltimore. It’s my home forever,” Peachy reflected. “The best part of my life has been all the great people, famous or not, I’ve had the chance to talk to. My experience makes what many consider a typical job sound very atypical.”

To make ends meet, she worked at Johnny Unitas’ Golden Arm and Haussner’s restaurants. At Unitas’ place, Dixon had a ball, talking with the superstar athletes who she says in those days made much less money and were more down to earth. However, over at Haussner’s, she did not make a large enough wage, and in 1974, she eventually moved on to Sabatino’s. This decision would have an impact on the rest of her life. Throughout her books, she notably mentions that everything great that happened to her happened at or because of Sabatino’s. 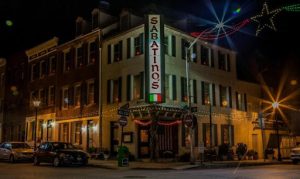 In the early 1980s, she decided she wanted something more fulfilling than waitressing and began to develop ideas for her own business, which she describes in-depth throughout her second book, “A Peachy Business.” As the owner of Peachy and Boh’s Place, named after her late father, she worked daily to provide customers with only homemade foods, a rarity then and even more so now. Well-known for her soups, subs, and delicious hand-crusted onion rings, the shop remained open for a decade. The business, which sometimes stayed open until 4 a.m., took a toll on Peachy. She decided to sell and return to a place she could always call home – Sabatino’s.

The lively downtown restaurant has always been there for her through thick and thin. Unlike other waitressing jobs, it has had one unique perk – meeting and greeting famous diners. Arguably, Peachy has approached more celebrities than some talent agents do, meeting the likes of Frank Sinatra, Debbie Reynolds, Johnny Depp, and Will Smith. She has also witnessed visits from countless politicians, including President Jimmy Carter, Vice President Spiro Agnew, and former California Governor Jerry Brown. 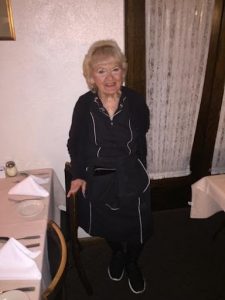 Her celebrity run-ins, prominently featured in her third installment, “My Peachy City,” are unforgettable tales. Many would agree that Peachy’s Frank Sinatra story tops all the rest. Sinatra, who first discovered Sabatino’s through his friendship with Vice President Agnew, a Charm City native, ate a meal from the restaurant each time he visited Baltimore. Before arriving, Peachy had no clue the “Chairman of the Board” would be arriving soon, but what she saw made clear something major was going on.

“I was walking up to the street corner at the restaurant, and I just saw the wildest things happening up at the fire escape. Our people were throwing all kinds of debris up there. I went in to see what all the commotion was about and noticed the upstairs dining room in shambles,” she explained. “The carpet was all torn up, and they were nailing down a new one. No one wanted to say anything, but they finally admitted that Frank Sinatra was coming. They begged me not to call anyone. Right after, with the restaurant literally remodeled in a day, Sinatra arrived.”

It’s remarkable and wild stories like these that remind Peachy of why Baltimore is where she has spent nearly every day of her exciting life. Still, she lives in the same Highlandtown home where she grew up. As for criticisms of the city, she chooses to look on the bright side.

“There is something good in everything, and through my life and books, I try to bring out the good,” Peachy said. “There’s too much violence in our city. It’s time to turn things around.”

Just a few months shy of her 80th birthday, Peachy is still going strong. Her golden personality shines everywhere she goes. While she does not know what the future holds, she is still waiting tables four nights a week at Sabatino’s and plans to keep treating people as she would want to be treated for as long as she is able. Her life is living proof that success stories of all types lie anywhere, even where others may initially see nothing.