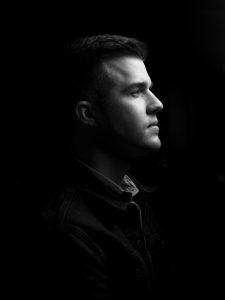 Eric Walter, an award-winning filmmaker making big dreams come true in Los Angeles, is a proud product of the Eastern Shore. Born and raised in Mardela Springs, Maryland, Walter has traveled far and wide to make his name as a director, producer, and documentarian. Before moving to the City of Angels in 2008, Walter worked behind the scenes in local news at WBOC. For the past several years, Walter, 35, has paved his way in the film industry and went freelance in 2014.

Now, he is returning home, virtually, for the Ocean City Film Festival Drive-In Weekend March 26-27 to showcase his well-known work surrounding one of the world’s most infamous and bizarre cases – the Amityville horror.

The endurance of the film has led to an exciting homecoming for Walter. “My Amityville Horror” was recently screened during the 5th Annual Ocean City Film Festival. He is thrilled to have his work on display in his old stomping grounds.

“It is so exciting to be working with the film festival, and I wish I could travel back home right now. I often wish I was back home, and I promise I’ll come back for good one day,” Walter reflected. “It’s extremely important to have the film showcased in the area where I was born. I love the landscape of the Eastern Shore, and it’s awesome to show a film in the very place that influenced me.” 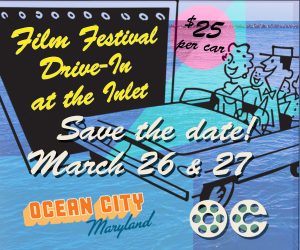 The film will light up the big outdoor screen at the Ocean City Inlet Parking Lot on March 27 at 8 p.m. Sit back, relax, watch the LED screen, and listen through your car radio. Tickets cost $25 per car, and the event is limited to 200 cars. Click here to reserve your spot. The film has a running time of 88 minutes. 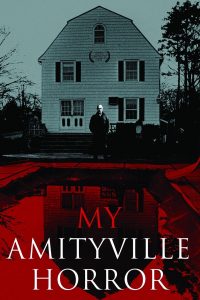 In the more than four decades since the chilling Amityville events transpired, the story has turned into a gold mine, with dozens of books and films each presenting their own unique perspective. Based on real events from Amityville, New York, the accounts center around the 1974 mass murder of the entire DeFeo family. In December 1975, the Lutz family moved in and lasted only a few weeks, after describing countless unusual phenomena such as demonic voices, invisible spirits, slime on the walls, and even levitating from their beds. In the years since, Hollywood has spun version after version of the notorious story, including the most popular film, “The Amityville Horror” in 1979. As a director, Walter decided to take a much different creative route when crafting his interpretation.

Walter’s groundbreaking documentary, “My Amityville Horror,” first premiered in 2012 and offers a brand new take on the 1975 hauntings. The documentary focuses on the mental and emotional toll of the happenings rather than sensationalism and speculation. Interestingly, the film marked the first time that Daniel Lutz, who was just ten years old at the time of the alleged paranormal events, openly told his story in front of the camera. According to Walter, securing hours of Lutz’s time was shocking.

“The fact that he was willing to speak was interesting because the children would never speak,” Walter said. “This story blew their family apart, and he was likely willing to speak because his father had passed away and previously controlled the narrative.”

The film includes conversations with eyewitnesses and investigative journalists, who provide their take on the experience Daniel Lutz still carries decades later. Walter’s work effectively paints a psychological portrait of Lutz’s recollections and memories from the worst weeks of his life.

As for whether the events are true, the speculation has and will continue. However, Walter’s film never intended to add any fuel to the fire. “It’s a fragment of a story that my film tells, but I wasn’t approaching it as making a horror film. I wanted to just share his story, be objective, and let the viewers decide,” Walter said. “If someone were to pull something like this today, they could have made out better financially, and there would be a reality show about them, but back in 1976, these people fled and went underground, went to San Diego, and lived on food stamps. They were not paid to pull any circus stunts. The family was actually afraid of something, but there is no clear answer on what that was.”

Amazingly, Amityville fans old and new, continue to stay entranced in the never-ending saga. Walter surely empathizes with all the Amityville enthusiasts – he is one himself! Since his teenage years, Walter has extensively researched the case and even started a website dedicated to not just the alleged events, but the controversy surrounding their validity.

Even after moving across the country in 2008, Walter continued his research. Eventually, Daniel Lutz surprisingly reached out to Walter himself, feeling confident that he was the best filmmaker to tell his unfiltered story. Lutz provided hours of interviews to Walter, knowing that he was not a Hollywood producer looking to exploit his story. A few years and $250,000 later, the film premiered worldwide at the 2012 Fantasia Film Festival in Montreal.

Since then, Walter has appeared on ABC, A&E, and Discovery+ to provide his expertise on the timeless and still evolving story. Even after years of research, Walter recognizes that while people yearn for a definitive answer, there simply is not one, and likely never will be. The mystery continues!

While Walter will eventually leave the big city behind and return to Delmarva, he is not ready to pack things up just yet. However, he is eager to return and start filming in the local area. Without growing up here, he does not believe he would be the same filmmaker.

“People around the local area helped me get my career started. When I went to work at WBOC and ran the camera in the studio, I was so young and got to do what I love,” Walter said. “People at WBOC later ended up in some of my short films, and the Salisbury Players supported me as well. I have kept up with everyone, and they helped shape who I am as a filmmaker.”

The pandemic has certainly altered Walter’s plans, but he has managed to mostly keep things rolling. In April, he released a short film, “Los Angeles in Lockdown,” depicting the early stages of the pandemic and the deep sense of confusion as one of the world’s largest cities came to a standstill. Walter continues to work from home for an entertainment marketing company, mOcean, and conducts his freelance work on the side.

Walter’s next major project takes the success of “My Amityville Horror” to another unexplained story. “Dark Side of the Mountain” chronicles the mysteries of unexplained deaths and vanishments in the tiny town of Silver Plume, Colorado. The documentary explores the stories of bookseller Tom Young and journalist Keith Reinhard, who both disappeared in the mountains.

“The new documentary is in post-production and shows how a story can start in a small place and transform into a sea of conspiracies,” Walter said. Stay tuned for updates regarding the official release of the documentary.

Walter, a true local success story, hopes to continue making films to explain the unexplainable for decades to come.